Jump to content
(This was originally posted at An American Thinketh)
Like President Trump or not, he has exposed how truly powerful and motivated our media is. They have the power to mold public opinion and are motivated to get eyes on websites and clicks on pages to earn their ad revenue. No longer do many media companies earn their income by paper sales and advertisements, but by online advertising, clicks, impressions, banners, pop-ups, and who knows what else. With that being the basis for advertising revenue, journalism has shifted from he who breaks the biggest and most important story, to he who breaks todays clickbait story (often involving the terms MAGA, Trump, or Conservative).
No longer are facts checked, sources verified, or the smell test even applied. Media sources, major ones, now run with a story of an unverified source from an eighth rate, high school drop out blogger for fear of missing out on the clicks. It is a model that breeds...and excuses negligent journalism – so long as eyes are on the page. They can always print a retraction on page 17 of their paper which no one reads anymore, or at 3 am in a list of retractions no one will ever see, or at a page on their website that has no way to access unless you type it in directly to your browser.
The current overhyped media train-wreck deals with the republished Buzzfeed report about white, MAGA hat wearing teens harassing an American Indian war veteran. It seems an odd premise to begin with, but it went from Buzzfeed to CNN to MSNBC to Huffpost to Mother Jones to The New York Times to the Washington Post to hundreds if not thousands of other media outlets, and even Fox News. The perpetrators, according to the media, were a bunch of MAGA hat wearing, private catholic school attending, white children from Kentucky participating in the March For Life, a march that the media gave no attention to until MAGA got involved.
A clip surfaced showing a young man named Nick Sandmann and a now known, professional protestor, Native American, and Veteran Nathan Phillips face to face. Phillips banging his drum in Sandmann's face and Sandmann standing firm with a smile on his face. Immediately the media went nuts on the White, Male, MAGA hat wearing, Catholic teenager from Kentucky. How dare he? Who is he to smirk? Legislators, actual legislators, called for a ban of MAGA hats for teenagers. A sitting US Congressman actually said "I am calling for a total and complete shutdown of teenagers wearing MAGA hats until we can figure out what is going on. They seem to be poisoning young minds.” He has since attempted to walk this back as an actual joke, but his tweet sure didn't seem jokey to me.  Judge for yourself: 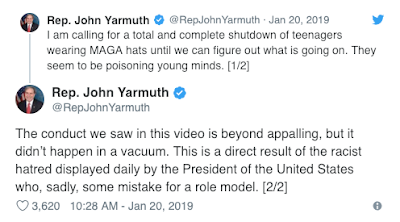 Eventually, after millions of people visited media websites for hours and hours, watching the edited video of the altercation, did the full video come to the public.  A new set of videos people could watch on the same media websites for more clicks and impressions and whatever else you call them.  This video now showed those students and others, including those participating in the Indigenous Peoples Rally, being subjected to the ire of the Black Hebrew Israelites, a group of the most racist people around.  In law school, I was subject to their verbally harassing street attacks and have had several friends experience the same.  They hurled racist insults at many in the area.
Then came the showdown, as all we had been privy to previously, was the video of young Nick Sandmann smirking in Nathan Phillips face as he beat a drum.  We were told he walked up to Phillips and blocked his way.  Of course, the video told another tale, the truth.  Phillips walked up into the face of the teenager and began to chant and bang his drum in his face.
Im glad that Nick had the self restraint to sit there and take it, because a lot of people would have pushed the drum away, pushed Phillips away, or worse.  But not Nick Sandmann, he stood his ground, as a teenager, in the face of an adult professional protester hoping to evoke a response.  To see what a real disrespect to an elderly protester looks like, this was video taken during the Brett Kavanaugh hearings.  Please don't get me started on the mass of fake news spewed during that fiasco.
Before this, Buzzfeed put out a report that the President directed his now disgraced Attorney, Michael Cohen to lie to Congress.  This was spread around the internet and social media, to the point that Robert Muller had to have a statement drafted, refuting the claim.  CNN even had the Buzzfeed editor on to discuss how he would stand behind this story, despite any lack of credible corroboration.   But hey, how many eyes got on pages, how many clicks were made, how much in advertising revenue generated during the one to two days this was sensationalized.
Let us also not forget about Jim Acosta and his series of broadcasts that he thought would demonstrate how safe our border is.  Each video showing the serene sunsets, the local restaurants, the shuffle board courts, and no migrants trying to enter.  He did this, and chose these locations to show a lack of people trying to get in, to create fake news that there are no illegal crossings occurring and thus no need for any wall.  Of course the nation mocked him and even called out his nonsense, including President Trump who comically tweeted:

This all isn't to say that mistakes don't happen.  Look what Fox News broadcasted earlier today... 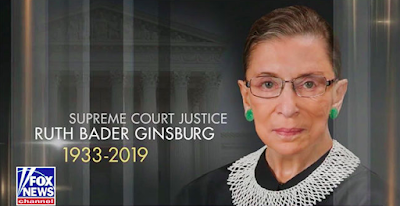 Shortly thereafter, an apology was put out and an admission made as to their mistake.  What can be taken from this?  It's part of that continuing need to be first, whether correct or not.  He who breaks the story first, often gets the greatest exposure.  No one should be surprised that the media wants to prepare for this.  Think how fast a teenager from Kentucky and a Native American beating a drum filled up every social media news feed, whether you are a news addict or the most uninformed social media user in America.  Now imagine a 3rd Supreme Court pick for President Trump, being able to replace a relatively liberal Justice with someone center to right.  Every conservative will be celebrating the President's ability to nominate, every liberal lamenting the passing of one of their Judicial heroes, fearing the next nomination of the President.  This is big, big, big bucks to the media.
I make it a point, when I see a sensationalistic headline, to not believe it until I verify it.  Part of that is to read the article, yes the whole thing.  Far too often, headlines seem to be from outer space, preaching the worst, the craziest, the scariest notion, to find nothing about the headline in the article.
Once upon a time, we lived in a world where we could trust the honest journalist trying to break a story.  Now, we are often left with half stories, edited videos, unconfirmed sources, and sometimes abject fabrication.  Our media frequently tells us what to be mad about, what to care about, what to discuss, and on and on and on.  This isn't done out of the goodness of their heart, their desire to be transparent media, or their desire to inform the masses.  Journalism is a business, and while the tangible paper may be dying, the online business is booming - and dependent on your eyes and mouse using their product.
Be smart and vigilant in what you believe.  Misuse of the 1st Amendment is every bit as dangerous as misuse of the 2nd Amendment.  Just ask Nick Sandmann, the subject of death threats, doxxing, and attempted derailment of his future.  Oh, and proposed violence from former CNN religion specialists... 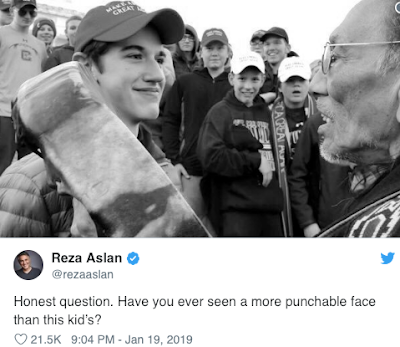