Dry fire training allows you to practice your firearm handling skills at home. You can practice holster draw/firing/re-holstering, reloading, strong hand firing, weak hand firing, malfunction clearing, and more. When dry fire training at home, you should always remember the fundamental rules of firearm safety, and ensure that there is no live ammunition around.

The older Mantis X systems use a picatinny rail mounted laser that works in conjunction with the MantisX smartphone/tablet app. You can print your own targets and trace your muzzle movements and shots. Mantis released their Mantis X training system several years ago, and I got to test this out at SHOT SHOW 2020.

The Standard Kit adds on:

Both kits contain a Pro access code to the Mantis Laser Academy App. This is extremely useful as this grants you access to the full suite of drills, including multiple target drills and even 2-person Duel drills. 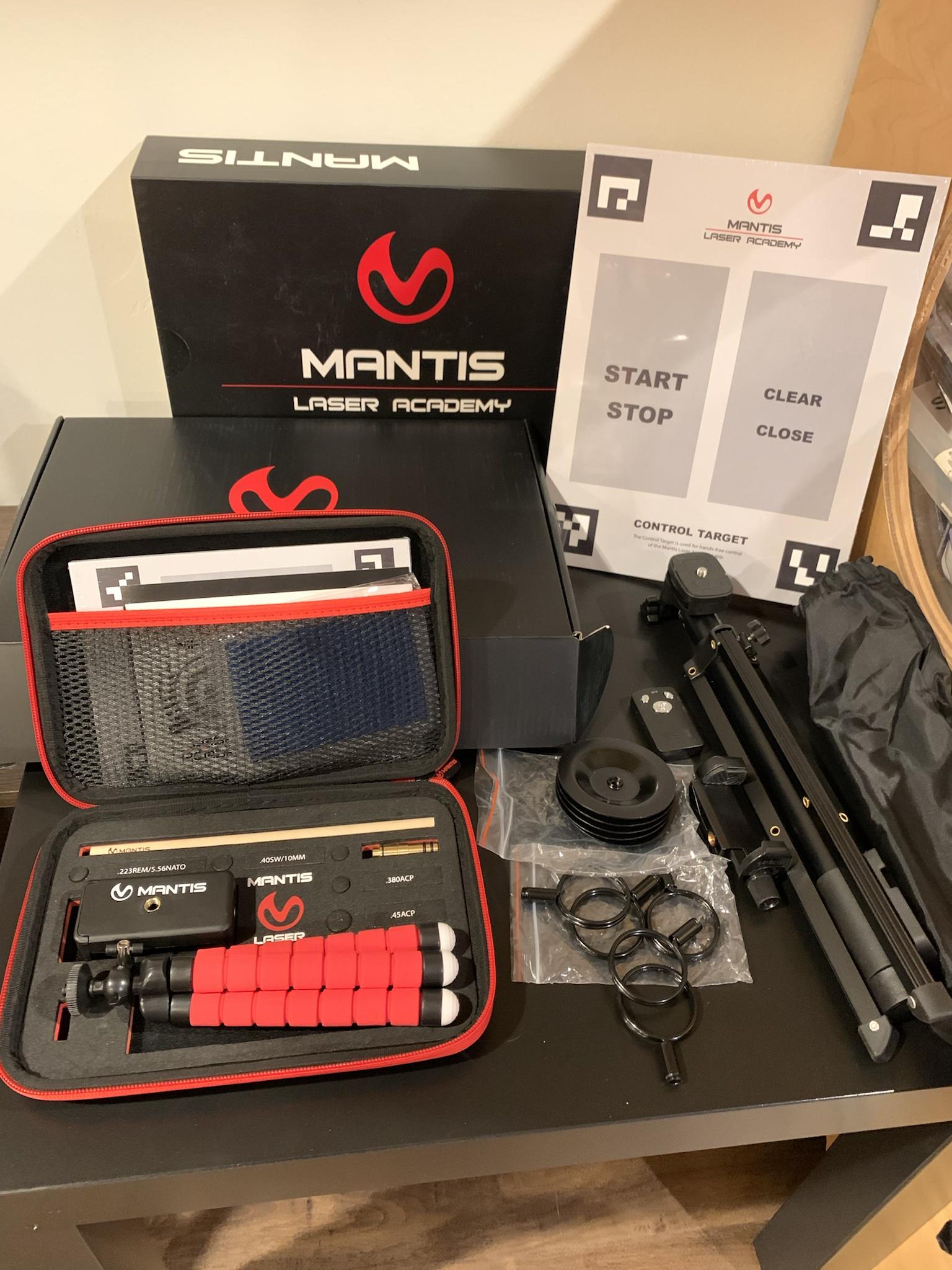 While the Laser Academy Kit does not come with many instructions, setting up the app is extremely straightforward. You can see which drills are included in the Free version vs the Pro version. Once you create your account and unlock the Pro version using the code included, you have full run of the app. 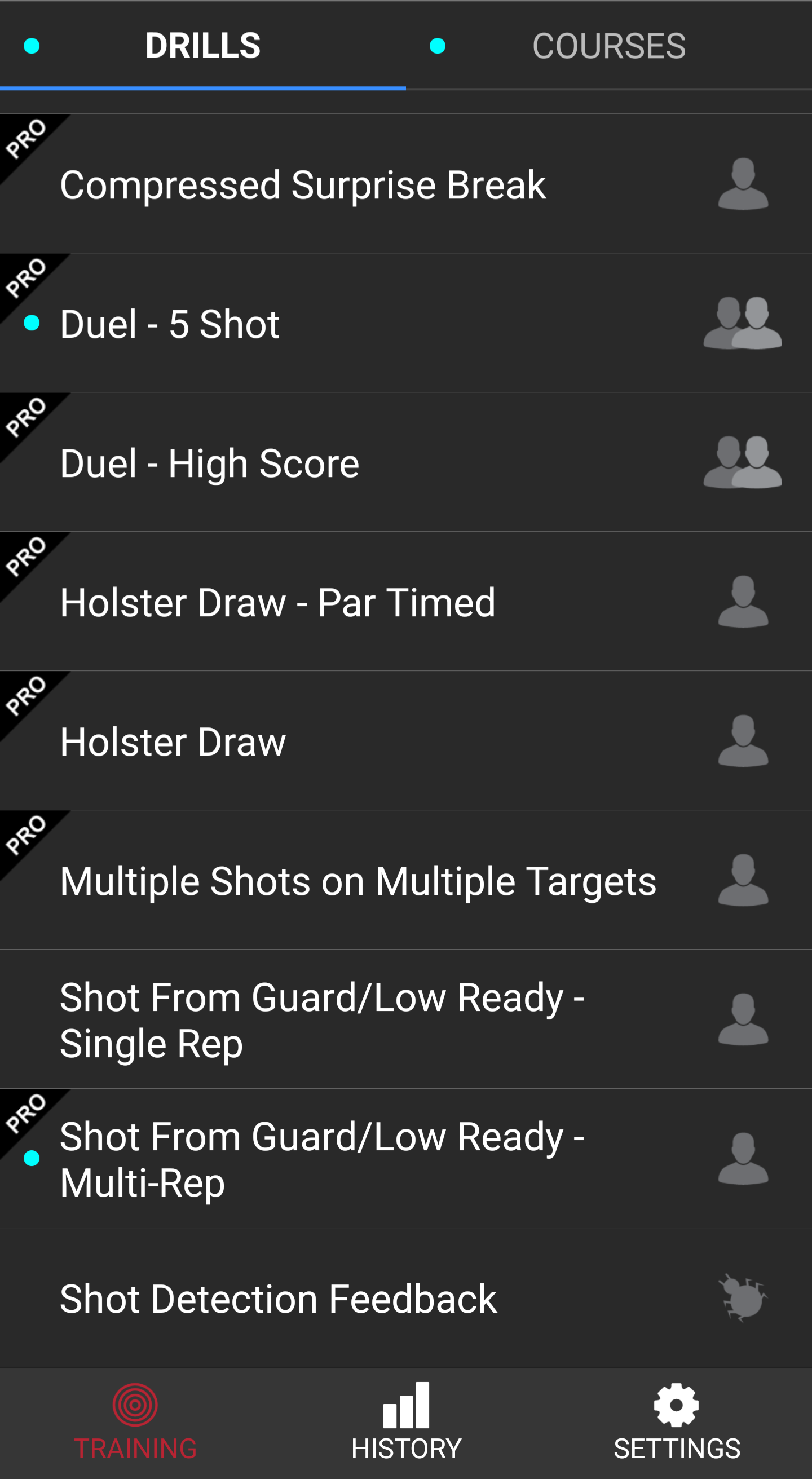 I setup a couple of targets and started testing them out. The first gun I used was my SIG P226 with the RXP slide with the SIG Romeo 1 Pro Red dot sight. I found that the Pink Rhino laser was not quite the same as a laser boresighting cartridge - it was not quite lined up with my sights/red dot. This is adjustable by using the "shoot to calibrate" option in the settings of the app. I found myself using this a good deal as I tested the cartridge in 5 different pistols. Besides the P226, I tested this system using a Beretta M9A3, Walther PDP w/ Holosun HS507C, Glock 19 and Glock 48. 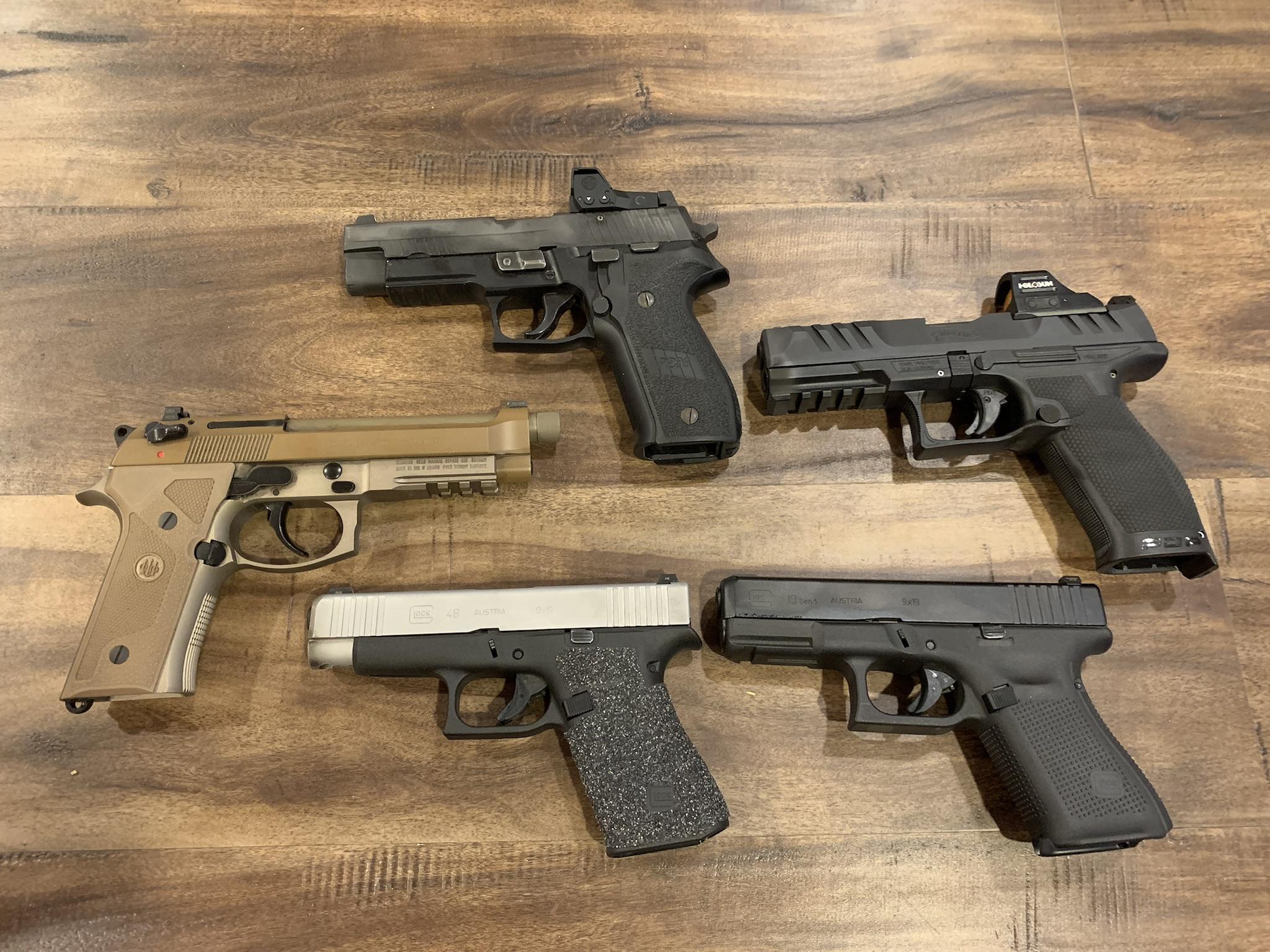 I setup a couple targets using the stands as well as my phone using the tall tripod. I found that the tripod and phone holder were nice and compact, but the angle adjustment was a bit rough - either my phone was usually pointing too high or too low - not directly at the targets. When extended high, the phone would tend to shake especially while being used - so it was a little hard to hit buttons and adjust. This was definitely because the tripod has such a long center pole that it's fairly unsteady at full extension. Once you are adjusted, however, it's not bad - this is where the Start/Stop control target comes in very handy so you do not have to touch the phone. 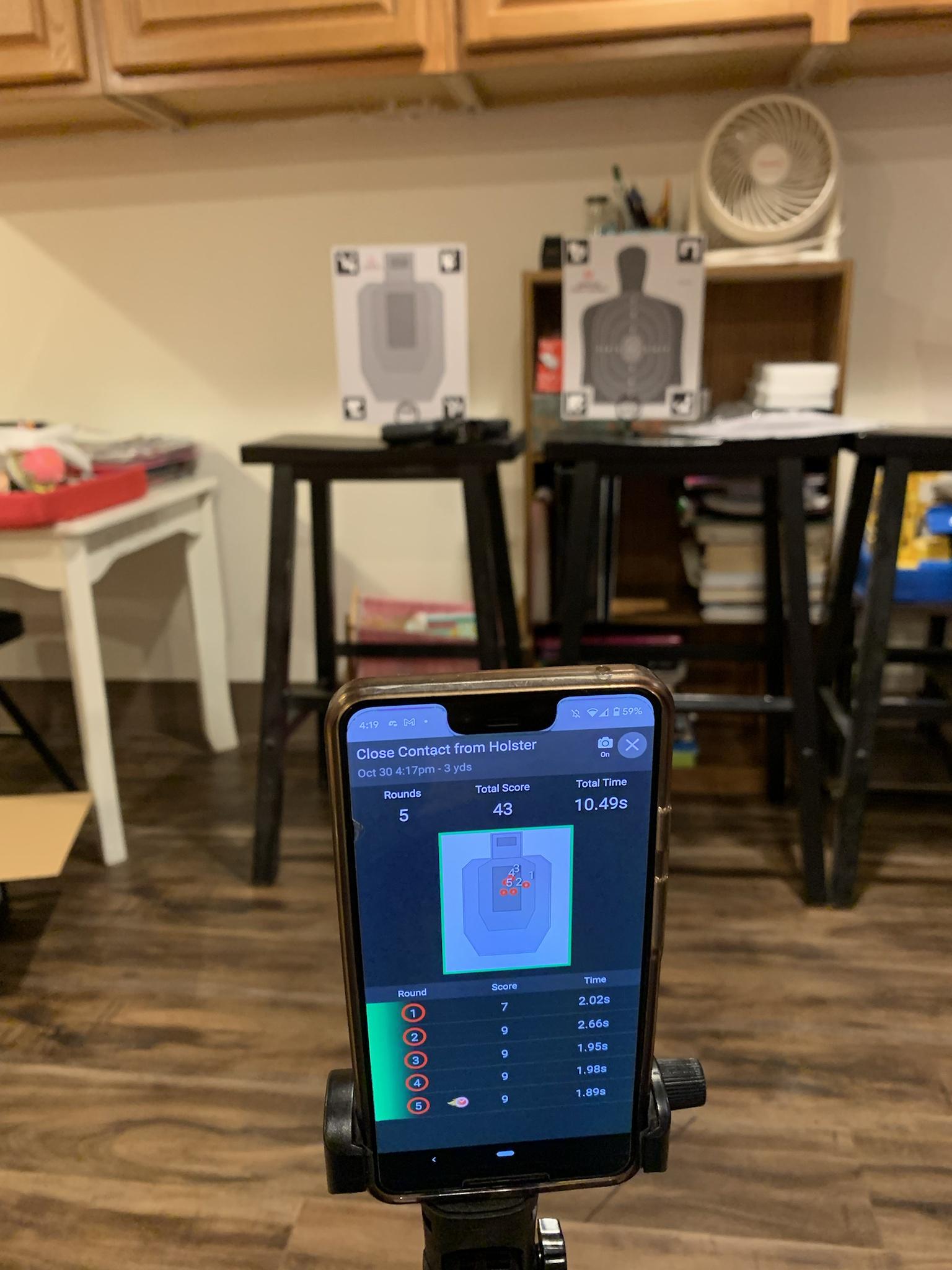 The drills had a great variety - I especially enjoyed the holster draw drills. Unfortunately, with striker fired guns you have to slightly rack the slide after each shot, so I tended to stick with the 2 hammer fired guns - the M9A3 and P226. They were easier to shoot multiple times without having to rack each time - I just had to deal with the long heavy double action trigger pull. A couple things I've noticed is that the app sometimes has an issue with reading targets if the lighting is not adequate. I also recommend measuring your distance to the targets, and calibrating the shots to that distance for maximum accuracy. 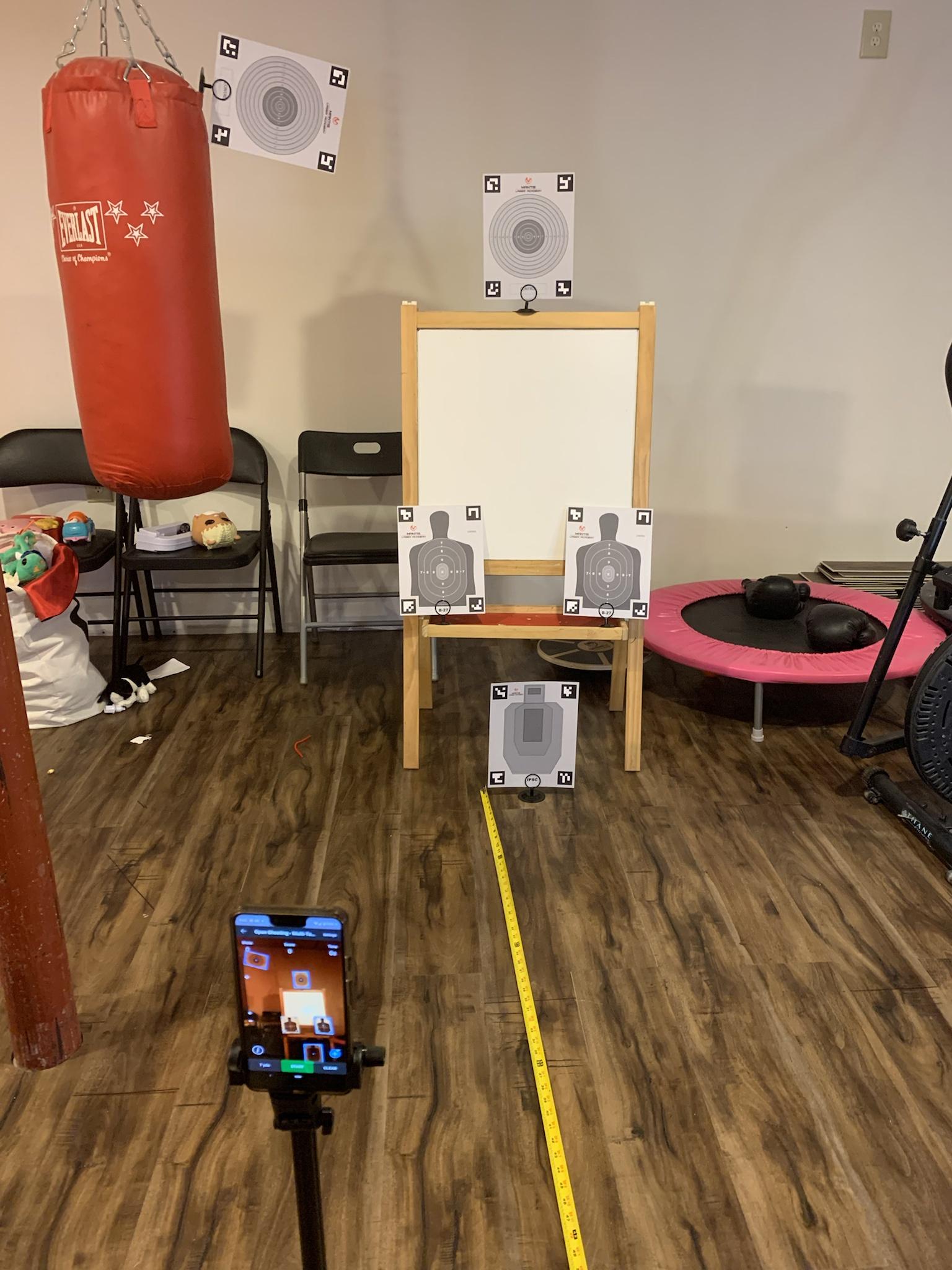 Sometimes the app would not recognize some of the targets. The middle left target is not highlighted in blue indicating a target area. it still detected targets hung sideways.

The calibration options in the app are excellent - and some are fairly needed. The shot calibration is key. I also played around with the shot detection feedback (the app would tend to hear shots when none were taken). For drills with repetitions - you can adjust the reset time - the time needed to re-holster and make ready. You can also change the number of reps and the countdown timer. One nice setting was that you could change the shot sound from normal loud shot to suppressed.

With multiple targets, you can create your own drill. In this, I shot each target once, then cycled through each again. The shots on multiple targets are color coded per target, and show your score and time in between shots.

The Mantis Blackbeard ($219) works well as an addition to the Laser Academy. It contains a special unit which replaces the Bolt Carrier Group and Charging Handle on a standard AR15. This is the self contained laser unit as well as the mechanism that resets the hammer on your AR15. The battery that triggers the laser and reset is conveniently located in the magazine portion, that is shaped like a 20-round magazine. The kit comes in a nice travel size case and includes a micro-USB charging cable and Allen key to adjust the laser. This is extremely important as you will need to sight in the laser. The switch on the unit changes the laser from momentary (when you pull the trigger) to always-on for sighting in. The battery has 5 LEDs which light up when charging, showing you the charge level of the battery. On full charge it should last about 10,000 "shots". This is a nice hefty battery - it took overnight to charge to full power (when it arrived it was at 2 lights - less than half charge). 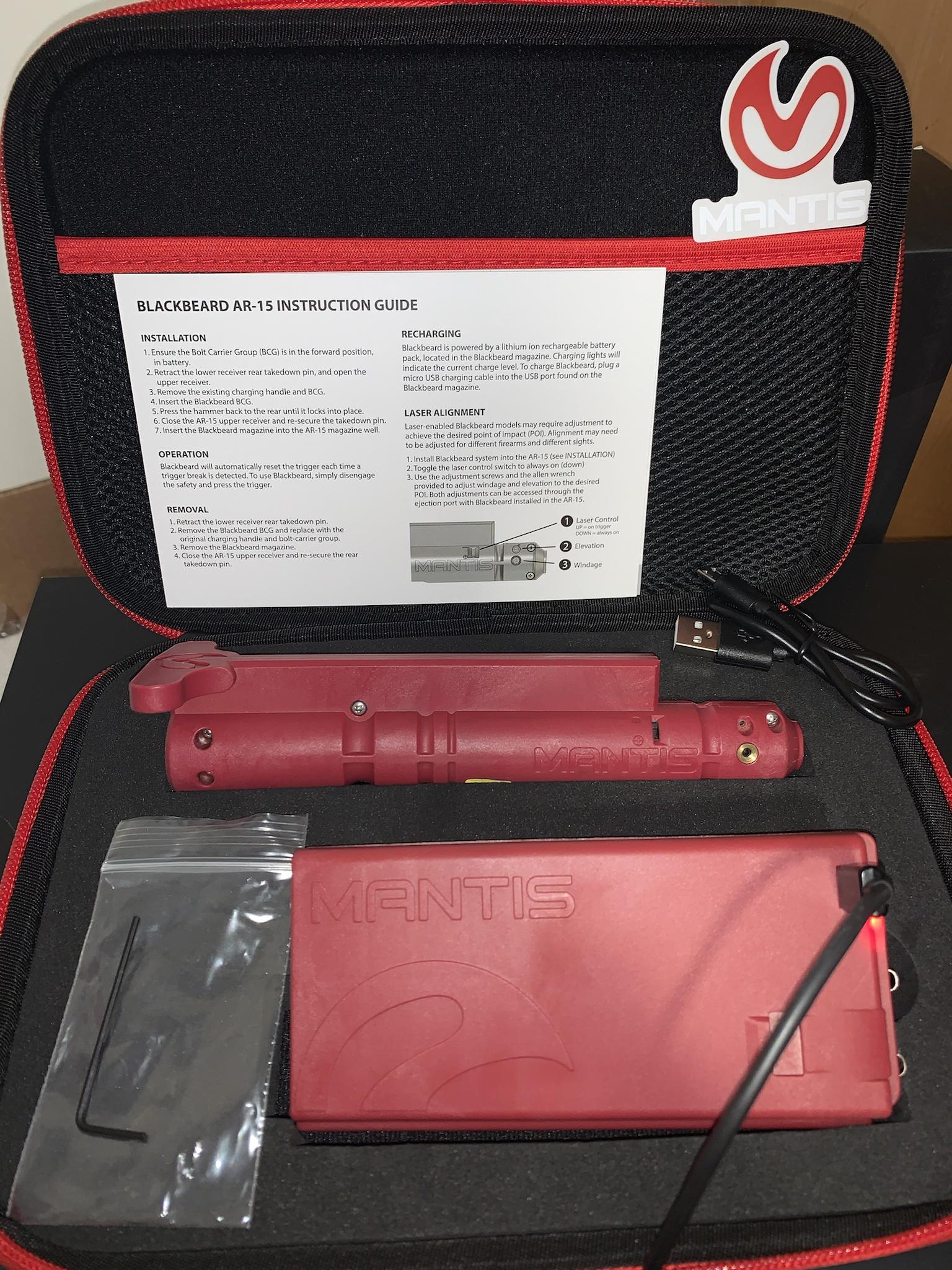 The AR I chose to install this on is my New Jersey legal Non-NFA "Other" firearm. The bright red color of the Mantis Blackbeard shows up nicely so you can tell at a glance that it's setup in training mode. When dry firing the Blackbeard makes a clicking type sound - you can hear it actuate and reset the hammer. The trigger feels exactly the same as if you're firing live ammo - the pull and reset are exactly as I expected. When I sighted in the Mantis Blackbeard laser I had to take the height over bore into serious consideration. With a 50/200 combat zero, the dot should end up 1.9" below the actual point of aim at 10 yards. If you use an AR15 for home defense - this is something you need to remember and train with, and the Blackbeard does help you visualize this in a way you normally can't do while pulling the trigger in your own house. Another benefit is that you can train with your AR platform firearm through simulated room clearing or check the potential areas of engagement in your house and see where your rounds will be hitting vs where you're aiming. 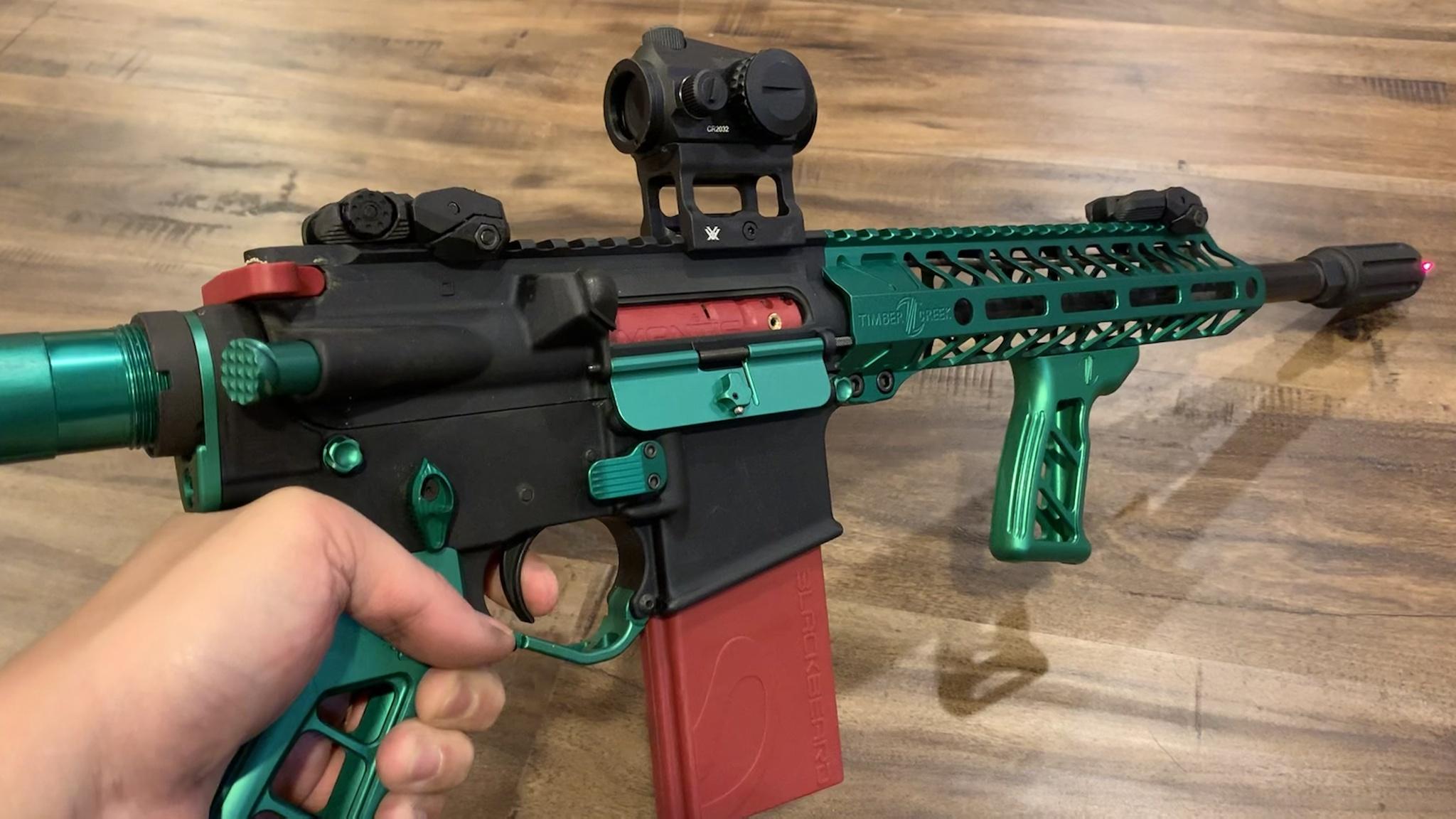 Mantis Blackbeard installed shows up nicely with the red charging handle/bolt carrier/magazine to make it easily recognizable that the firearm is setup for training.

The larger 8"x11" targets from the Training Academy made it much easier to engage targets with the Blackbeard from a longer distance. I was able to get 7 and even 10 yards of distance in my basement which worked out fairly well. The targets are meant to be engaged at a fairly close distance, but with the height over bore issues with a rifle, you really can't do that very well. One slight nitpick is that you can't easily transition from an AR with the Blackbeard to the Pink Rhino laser on the training academy without making some concessions for laser accuracy - you can only calibrate the app for accuracy by position for 1 laser, not multiple. 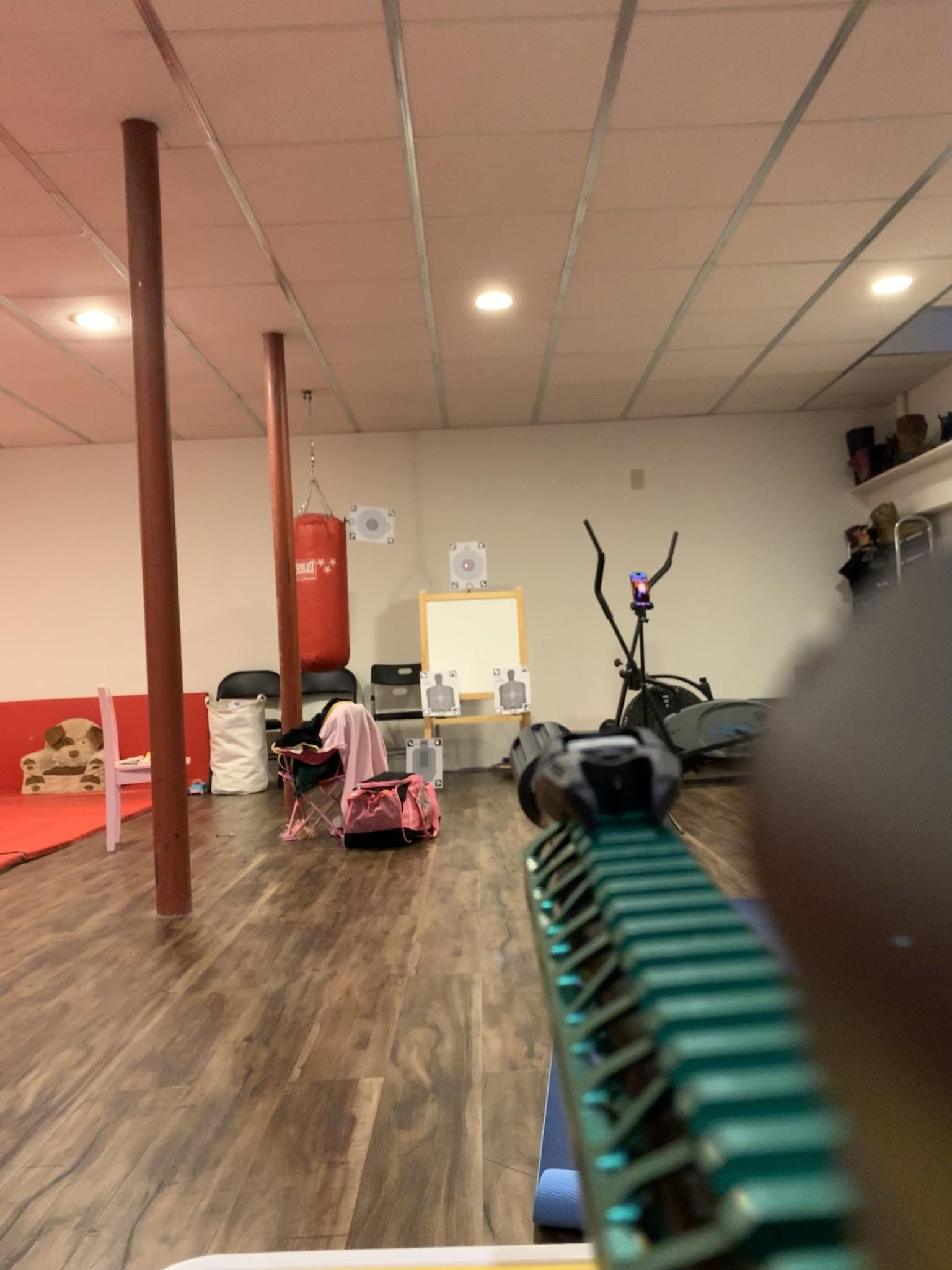 Shots are clearly visible at range

It's very easy to just pull the trigger and keep whanging away at the targets since you don't have to worry about changing mags or ammo costs. With the multiple target option in the Training Academy app, you can shift targets easily as well and still keep proper track of your shots. This also makes you quite aware of your trigger pull weight - as many shots can wear down your trigger finger! This AR is using a standard mil-spec trigger group. An upgraded trigger would definitely make a difference. 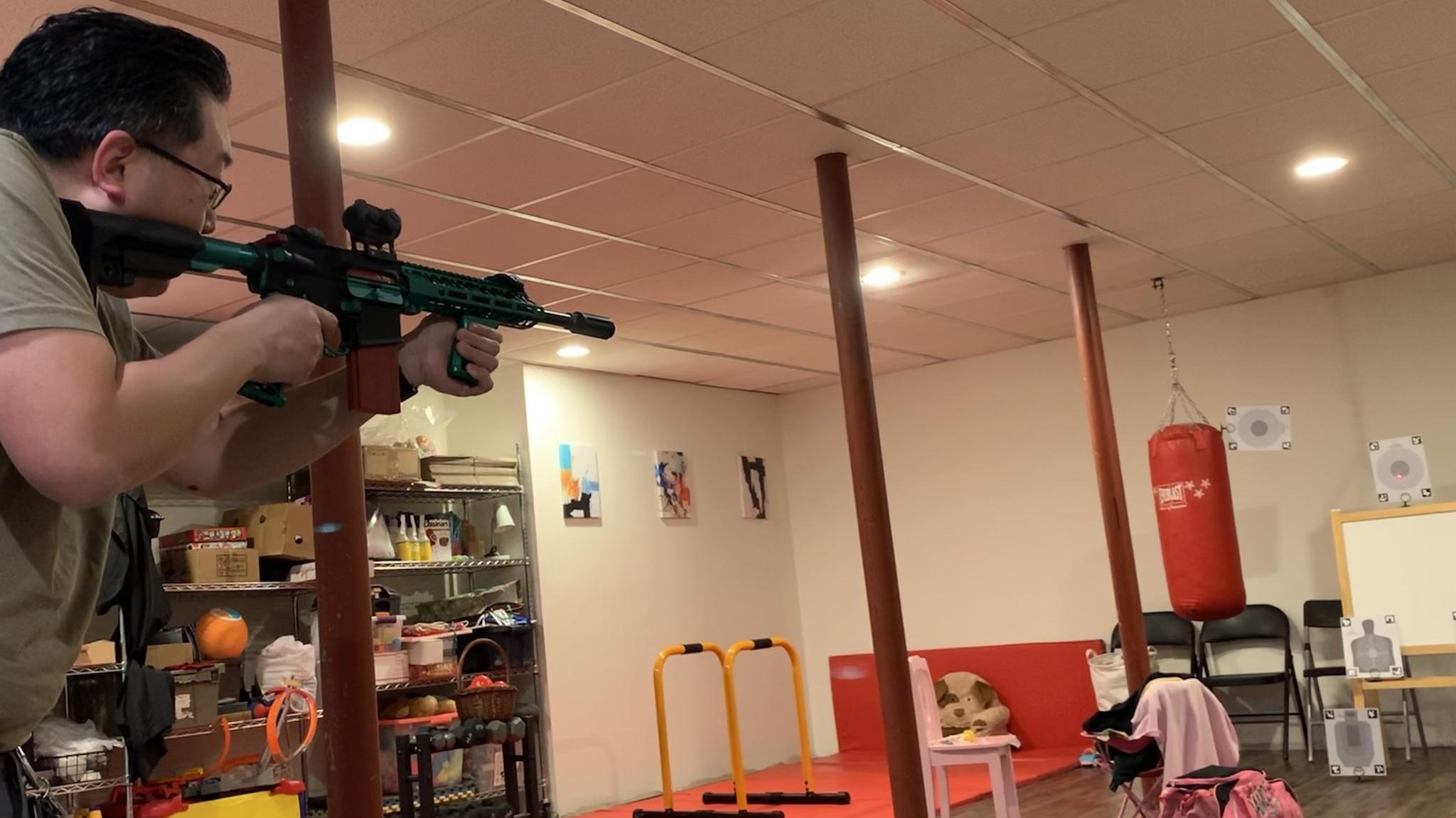 I thoroughly enjoy training with the Mantis Laser Academy and Blackbeard system. With these dry fire training aids, you can keep your skills sharp, and make a marked improvement on your skills without spending thousands of dollars in ammunition. Practicing concealed carry draw, holster draw, and practice engagements or room clearing in your house are all practical training you can't replicate at home with live ammo, and this is the next best thing! Visit Mantis at https://mantisx.com/

The Mantis Laser Training Academy and Mantis Blackbeard were provided for testing purposes by Mantis.