Remember when you acquired your first firearm?

For most gun owners, that time was both exciting and scary!  On one hand, you acquired your first handgun and had hopefully gone to the range.  At the same time, let's admit it, unless you were in the military,  you were at least a LITTLE bit afraid, either of scratching up that shiny new bluing, not being able to put it back together after cleaning, or even leaving it unattended.  After a while however,  you become accustomed to it and it becomes "yet another gun."

Much in the same way,  I look at "going to the range."

It is the near universal experience of gun ownership.  You purchase your gun and then you end up going to the range to shoot at least once or twice a week for the next 3 to 6 months.  Every trip is exciting as you become more and more proficient with the gun and discover your passions for different firearms.  At some point however you average day in the range goes from 4 or 5 boxes of ammo to a mere social event and 1 or 2 boxes of ammo becomes the norm.  Simply put, going to a typical range and standing in a port and shooting at a bullseye or a zombie target was no longer fun or appealing.  If you are at the range, it is typically to function check your gun, chrono your loads or just to make sure the gun works and remains rust free after that unfortunate boating accident.

This is why I believe in and encourage community members of all experience levels and interests to go out and try some form of matches, whether it is steel matches or one of the practical shooting sports such as IDPA or USPSA.   Not only is it fun, but it is also a great way to take your shooting skills to the next level.

But what if you can't do that?

I recently came across some targets made by REFactor Tactical.  The company is a veteran lead business catering to military and civilians, offering products and solutions for on and off the battlefield.

One of their solutions is their line of shooting targets which I have come to call "Targets With a Purpose."

There are 4 that I have come to really appreciate.

The first target is your standard USPSA/IPSC Practice Target.  Generally I am a fan of using the thick cardboard targets for nice clean holes and the ability to paste them. This lets you use use the targets for quite a long time.  Unfortunately there are a few downsides.  First, a pack of 25 or so has some weight and they take up quite a bit of space to store.  Secondly, it is not so easy to use the cardboard targets at many indoor ranges.  The challenge is, with a cardboard target, you are attaching the head next to the carrier, so unless you want to risk destroying range equipment, a good portion of the target is unusable.

The REFactor Tactical target is printed on paper with wide margins. As such, you can easily use them at an indoor range or outside with wider target stands. 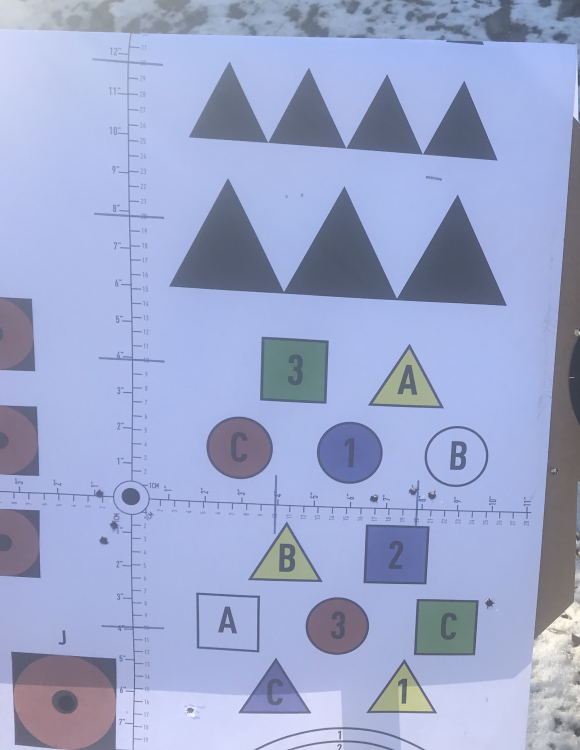 When it comes to rifles, my favorite target is the Hitman Target.   The target comes complete with a grid overlay which is extremely helpful for sighting in a rifle with a new optic.

Once dialed in, the left side of the target has bullseye target grids ranging from 1" to 3" boxes. They are great to use for 1 MOA groups out to 300 yards.

The right side of the target features similar triangles and a bullseye target on the bottom.

Even though it is meant for rifles, this target is also great for handgun training at close ranges.

The other two targets are meant for "gun work," or targets designed to work on the fundamentals of shooting.

At a recent range day, I really enjoyed practicing with these targets and the cards.  What is quite eye opening for me was finding out that despite not having difficulties with accuracy, I had real issues shooting triangle shapes, typically shooting just below them.

Perhaps to make it even more challenging, I practiced with a completely different handgun than I am used to shooting, a Smith & Wesson M&P 9mm versus my go to 1911s and CZ 75 SP01 Shadow Custom.  To make it even more interesting, I alternated the magazine between my regular match loads and Speer Gold Dots +P ammo.  (Or perhaps I just happened to leave my gun game guns at home and the M&P was the only handgun in the range bag with some ammo.)

Finally, the other target that I believe would be of great interest and benefit to gun owners is the Essentials Shooting Target,

It is a full sized target of various sized squares and circles, along with a bulls eye.  It was designed around a 150 round drill which covers multiple aspects of pistol marksmanship including slow aimed fire, strong and weak hand shooting, target transitions, speed changes, drawing and reloading.  You can find the drills in their book, the "Essentials Shooting Guide"  or simply create your own drills.

Bottom line, these were some of the best targets I have shot in the last 15 years.  Factoring in that you are supporting a veteran owned company who produces the targets in the United States at very reasonable prices,  there are no reasons why a few of these are not in your range bag for your next  trip.

There are no comments to display.